This cable calculator is to be used as a guide only; the cable sizes are worked out using information given from your input, accurate values are essential to give you the correct cable size. The user is to ensure the type of cable is suited to environment and conditions the cable will be exposed to.

This cable calculator is set for Installation method C (Clipped Direct), for cable types BS5467 and BS6724 SWA (Steel wire armoured cable) and is based on the voltage drop selected at 230V single phase and 400V three phase.

Filter by Core Size In MM²

Filter by Number Of Cores 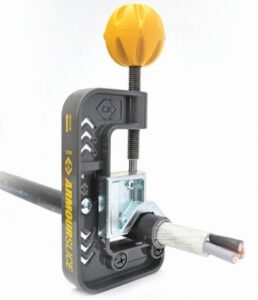 Steel Wire Armoured (SWA) 2 Core Cable is a variant that is steel reinforced, water and dust-proof cable usually constructed using Stranded Copper for the cores, sheathing made from either PVC on normal SWA Cable or LSF (Low Smoke & Fume) PVC on the LSF SWA Cable, armouring made from steel on multi-core cable or aluminium on single core cable, and bedding also made from PVC.

As the cable’s insulating layers are protected by the steel or aluminium wire (depending on core count), this makes the cable suitable for highly corrosive areas such as on building sites and underground installations. The armouring also enables the cable to have a higher pulling load.

LSF SWA Cable, as stated previously, is a Low Smoke & Fume variant of SWA Cable that is primarily found in areas where health and safety is an important factor. For example, hospitals use LSF SWA Cable as it means that patients aren’t at risk of injury due to the smoke/fumes from the cable during the event of a fire. The lack of smoke also means that it’s easier for patients to located emergency exits. Another place LSF SWA Cable is found is schools as hospitals and schools have more stringent health and safety rules to abide by.

Not only does the armouring protect this cable, but also the PVC sheathing on the outside of the cable. This protects the cable against hazardous materials such as corrosive chemicals and particles.
If you’re considering installing this cable into an environment that is deemed as extreme, such as arctic or desert temperatures, a certain sheathing made from a specialist material may be required to ensure proper protection of the insulating layers beneath.

Installations and applications that SWA Cable might be found in a variety of different industries including Building Sites, Railway Lines and other Transport Industries. You might also find this cable being used in automation systems as well as on electrical panels that require a constant power source and in cable ducting, installed into the ceilings of warehouses and factories.

Even though the impression may be that armoured cable is only really used in industrial applications, which is not the case as it is also used in many domestic ones too. For example, the cable can be used for outdoor lighting installations, hot tubs and large water features that require high-powered pumps. Please note that the size of the cable that is required depends on how much voltage is going to be put through it. Make sure an electrician or industry professional has identified what size cable will be ideal for the job you will be using it for as it could become a safety hazard if the wrong size cable is used, especially if it is too small for the voltage.

Here at Quickbit, a large range of Steel Wire Armoured Cable is stocked and supplied, ranging from regular PVC 2 Core all the way to 5 Core LSF. If there is a specific type that is required for an installation you’re doing but you cannot see said type on the website, please feel free to call our sales team on 01244 288138 for further information and assistance on finding the cable you require.